A Tribute to the Statue of Zeus at Olympia

Home A Tribute to the Statue of Zeus at Olympia 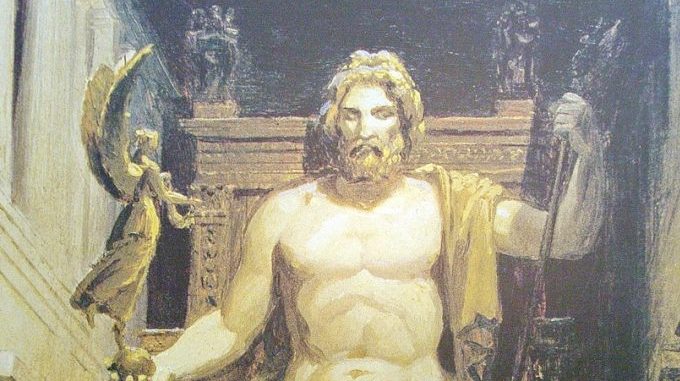 The Statue of Zeus at Olympia, created by the famous Athenian sculptor Phidias around 435 BCE, was one of the Seven Ancient Wonders of the World.

This same sculptor created the many notable pieces, including the stunning and enormous Statue of Athena Parthenos, located in the Parthenon.

The Temple of Zeus – an awe-inspiring and remarkable four-storey building – was built to honor the god of gods, Zeus. The temple also became the home of the Ancient Olympic Games.

Located in Olympia, it was designed by the architect Libon, as it was too simple a task for Phidias, who was instead commissioned to build the Statue of Zeus at Olympia.

Building the Iconic Statue of Zeus at Olympia

The gigantic 13 meter tall, chryselephantine statue was created in Phidias’ workshop, one piece at a time using a unique and time-consuming method involving wooden framework, ivory sheets, and gold panels.

The ornate, seated figure was decorated with precious and semi-precious stones, ebony, ivory, and gold.

Pausanias, a 2nd-century AD traveler and geographer described the statue in great detail. He wrote:

What Happened to the Statue of Zeus?

The Statue of Zeus at Olympia stood strong for hundreds of years, enduring earthquakes, but was destroyed by the Great Fire of Lauseion. around the 5th century AD.

Today, the modern world knows of the historic statue only from ancient Greek descriptions, engraved gems, and coin representations.

Archaeological digs unearthed only a few columns and some evidence of the workshop of Phidias in the 19th and 20th centuries, where the Statue of Zeus once stood.

Veta and his taxi service is above excellent.

Veta and his taxi service is above excellent. She is friendly, helpful, trustworthy and made our 5 hour day stress free. She stayed close by to ensure her trust that she would be there for us. She provided personal service for 5 hours and even got us tickets to Olympia so we could avoid waiting in line. Very nice woman we enjoyed having her be part of our group and in our photos. We highly recommend her taxi service.

An excellent day trip in Katakolon with Veta

An excellent day trip in Katakolon with Veta. We particularly enjoyed the visit to the Honey farm and the monastery. Veta speaks excellent english and gave a very interesting insight into his region's history and traditions. We highly recommend this tour to anyone stopping in Katakolon during a cruise. Thanks again Veta for a lovely day

Had a great tour with Veta

Had a great tour with Veta as our driver/ guide. We were a group of 5 on last leg of our cruise. Would recommend!

Dimitris was very professional and offered the best services imaginable. A lot of information was provided to us from the driver. He can provide any custom tour that works with your schedule. Thank you again for the quick tour & amazing services.

Wonderful service, Picked up from and delivered to the port with ease. Fantastic value and nothing was too much trouble. Comfortable air conditioned van, cold water supplied, helpful tour suggestions and went out of his way to find some special things ...

I highly recommend the myOlympiatour! Olympia taxi tours with Dimitris was amazing! Your concept of private taxi tour is just perfect!

Tour to Ancient Olympia from Katakolon

Amazing tour guide. He picked up from Katakolon Port. We went to Olympia and the area around. We then went to the Kourouta Beach. He was accommodating. He recommended an amazing restaurant. If I could rate him higher I would!

We provide efficient comfortable private tours from Katakolon Port. Relax and enjoy the comfort of our private tour in one of the luxurious vehicles.

With more than 15 years experience, we will do the best to meet your expectations.